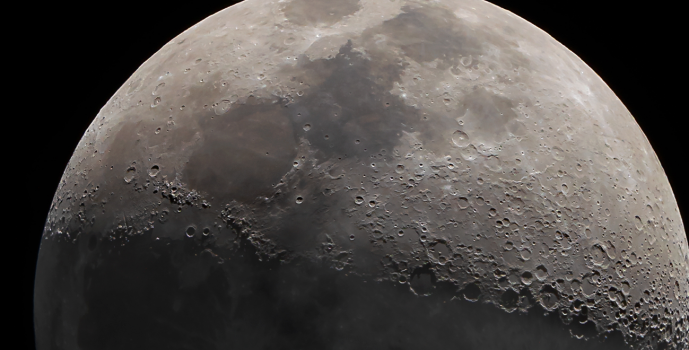 The moon is always beautiful, unless its ruining the observation of other objects.

I have used various telephoto lenses and DSLR combinations in the past to photograph the moon. I love the modeling light that appears on the terminator where you can see details of the craters. It feels like you’re orbiting the moon when you see this up close. This shot from March of 2020 is actually a sandwich of two layers, one of the half moon , the other of a full moon, actually the supermoon. I dimmed that shot down to look like shadows, and then carefully layered it in Photoshop.

I had to wait two weeks to get the full moon shot. When I was layering the two images, I was surprised that they didn’t line up exactly. I had to re-scale it because the full moon was truly a SUPER moon, and 14% larger than your average moon!

Taking lunar photos is more tricky than it looks. Due to atmospheric currents, you can often see the image fluttering as if in the breeze. The result is quite often a blurry photo. The night I took this, I was just messing around using the lunar craters to focus on, before it really got dark. I could see instantly that the clarity of the air was very special. I’d never seen the moon in such detail. I used my SONY A7rIV mirrorless camera and the RASA (aka big scope) to capture this, the best of about 20 images I took.