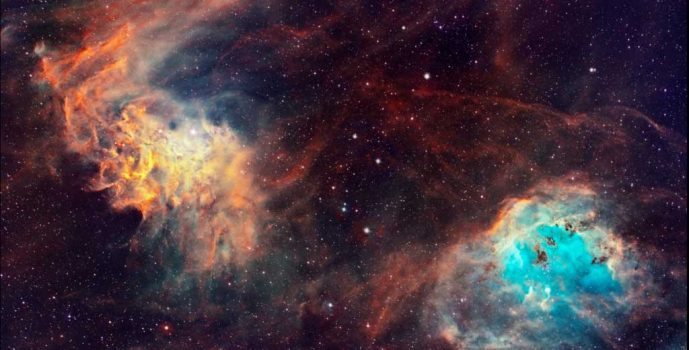 Richard Whitehead May 2, 2021 Observations No Comments

The Tadpoles Nebula (IC410) and Flaming Star Nebula is found in the constellation of Auriga.

I took this HaSHO image last week on a very rare, almost clear night. In fact, it was the clearest night in northern Vermont since last July. Rather than completing some earlier projects, I thought I’d shoot something entirely new, and go for these subjects as they (almost) fit on the same frame at 620mm focal length.

The Tadpoles Nebula is so-called due to the two light colored, tadpole-shaped dust and gas clouds that look like they are swimming upwards toward the center of the nebula. These are star-forming regions, similar to the famous “Pillars of Creation,” imaged by Hubble in the Eagle Nebula.

To get an idea of scale, each tadpole is 10 light years long, more than twice the distance the earth is from its nearest stellar neighbor, Proxima Centauri.

To the left, is the Flaming Star Nebula (IC 405) which surrounds the variable star AE Aurigae, a “runaway” star ejected from gravitational perturbations in the Orion Nebula more than 2 million years ago. It’s interesting to note that although these two nebulae appear close together, the Flaming Star is 1,500 Light years distant, whereas the Tadpoles Nebula is 12,000 light years away, and over 100 light years across.

This image is processed in the “Hubble Palette” where red is aligned with Sulphur emissions, green with Hydrogen , and blue with Oxygen.