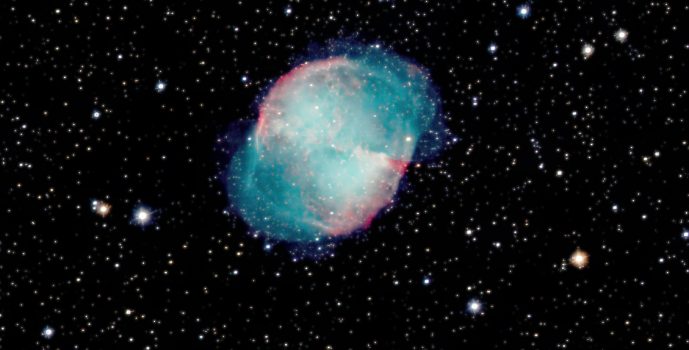 It was the first Planetary nebula that he observed. Planetary Nebulae are nothing to do with planets! early astronomers saw that these objects looked a little like the disc shape of planets in their relatively poor optics of the time.

What we are seeing here is the future fate of our own sun. In billions of years the sun will run out of energy and lose its atmosphere of hydrogen. After this gas is lost the remaining tiny star is a ferociously hot white dwarf emitting strongly in X-ray and UV spectrum. This then excites all the gas and makes it glow. M27 is about 1,200 light years from earth, and the phase its going through is only temporary (well for a few 10-thousands of years anyway, eventually shrinking to a tiny white dwarf in a forgotten corner of the Galaxy.